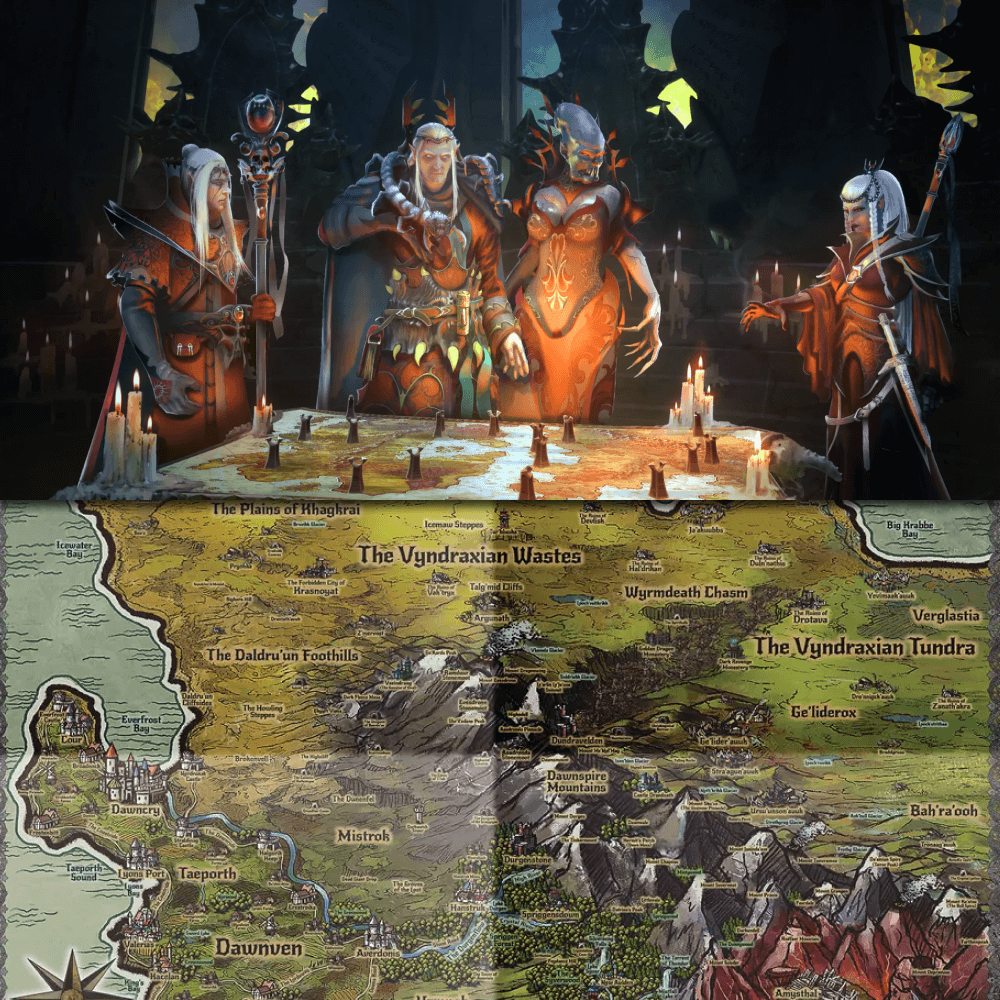 This third volume of the Cyclopaedia Zyathica covers the eastern half of the sundered continent, giving a deep look into a harsh yet breathtaking region of the world. An ancient landscape, East Verdestia houses the ruins of fallen empires, while the exploits of long-gone heroes and villains may still be heard on the streets of its modern nations. From the ever-feuding realms of Dawnven and Vanzentea, to the dark, insatiable hunger for expansion at the heart of the burgeoning Vilandean Empire, the Esenverd is rife with hidden machinations and shadowy conflicts. Far beyond the last outposts of civilized lands, towering mountains reach for the heavens, dragons come to die in Wyrmdeath Chasm, and the trackless tundra stretches to the horizon. Deadly monsters and forgotten evils lurk in this wilderness, but the stark beauty of the land is far from the only treasure to be found.

The East Verdestia Map Pack divides the Esenverd into nine sections, showing each region of the continent in full-color and striking detail. Each poster-sized map is hand illustrated and presented in ¾ map format with dimensional elements that create both a fantastical and vintage look and feel. Scrutinize the busy ports of Dawnven and the burgeoning cities of Vanzentea. Survey the vast expanses of the Vyndraxian Tundra, and ponder the mysteries of the foreboding forest of Avourda’maleu. Trace the expansion of the dreaded Vilandean Empire, while contemplating the dangers and glories lurking within the marshes of Essthenassa. Explore the incredible adventures that await in these lands, and many others of the Esenverd. Seek them out if you have the mettle. All Major Points of Interest

Whether you want to set your campaign in East Verdestia or simply want to follow the trails set in the East Verdestia Cyclopaedia, these maps are an essential aid. Explore the Nations of East Verdestia

Trek across the tundras and wastes of Vyndraxia, down through the rival nations of Dawnven and Vanzentea, then over the Mithril Mountains where the Vilandean war machine poises for conquest. Dare to enter the great forest of the Avoura'maleu, where desperate elves attempt any and all method to restore their population. With so many captivating locations with strange tales attached to them, it would be hard not to become inspired to expand upon the tale, roping players into investigating further.